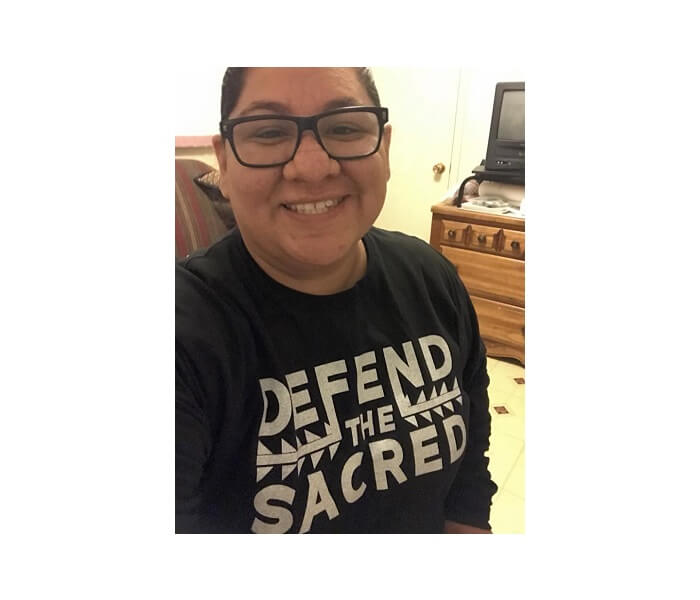 Mikah Carlos is a member of the Salt River Pima-Maricopa Indian Community and is 24 years old. Mikah first learned of the 2017 Gen-I Survey through social media. She decided to take the survey because she recognized the importance of having tangible, first person narratives and data directly from Native youth.

Mikah began to understand the importance of her tribal traditions and culture in the fifth grade, when she relocated back to her reservation and attendedSalt River Elementary School. It was there that she reconnected with her culture and community after having lived off the reservation in Mesa, Arizona. She remembers learning her tribe’s traditional dances and being captivated by courses that taught her Native language, recalling that her classes at public school were nothing like this. She came to know the importance of being involved in community and began to see her tribal community as extended family. This embrace of community now drives Mikah to be a role model for Native youth and a resource for policymakers. Furthermore, her work as a tribal ambassador made her realize that education is essential in enabling her to support her community in making decisions for a better tomorrow.

Mikah is now Co-President of the National Congress of American Indians’ Youth Commission, working towards the goal of preparing and affirming Native youth to become changemakers through policy development and advocacy. Additionally, as a student officer in Arizona State University’s American Indian Initiatives, Mikah engages her campus community and the 22 local tribal communities surrounding her school. Through her work with ASU’s Tribal Nations Tour project, Mikah promotes higher education among Native youth by helping students with college readiness, career preparation, and recruitment for the university. This is just a small portion of the great things she’s working on!

As one of our randomly-selected Gen-I Survey Prize Winners, Mikah received a Defend the Sacred Tee from Honor the Earth as a gift for sharing her perspective. Hearing from Native youth like Mikah and all others who participated in this year’s survey is a part of the driving force behind our work. Thanks, Mikah for sharing with us!