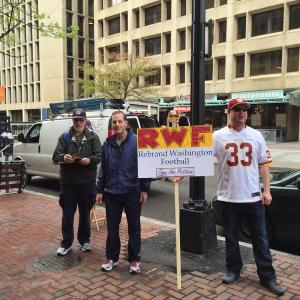 Rebrand Washington Football is a grassroots advocacy organization that petitions Dan Snyder, owner of the Washington DC professional football team, to change the team’s name. RWF was created by DC football fans who say they do not want to be ashamed of the team’s name anymore. RWF founders Josh Silver, Ian Washburn, and Sheila Miles often station themselves outside of the Dupont Circle Metro station in Washington DC to collect signatures for their name-change petition, and it was there that the Center for Native American Youth first connected with the organization.

The Center for Native American Youth partnered with Rebrand Washington Football to produce a statement in support of changing the football team’s name, citing that over half of surveyed Native youth expressed a need to improve school climate for Native students by removing racist mascots and other stereotypes.

On the morning of December 3, Josh Silver and other RWF representatives were joined by Native youth and anti-R*Skins advocates to hand-deliver the name-change petition, along with CNAY’s statement of support, to the football team’s Northern Virginia headquarters. The petition carried 1,820 signatures – an increase from last year – and RWF intends to continue educating the public and collecting signatures until their mission is achieved.

RWF, Native advocates, and other allies deliver a petition to change the name of the DC football team to the team’s headquarters in Northern Virginia.