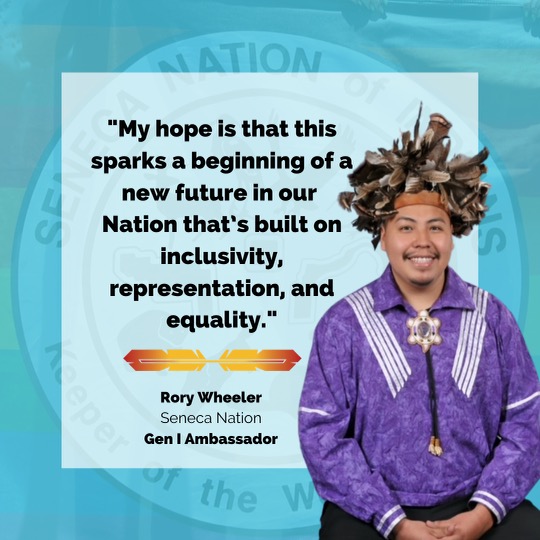 On June 9th, 2021, I was proud, not only as an ally of the LGBTQ2S+ Community, but also as an elected official for the Seneca Nation, to support my fellow Seneca citizen, Olivia Maybee, as she organized a rally to urge the leadership of the Seneca Nation to have her custom Seneca Nation pride rainbow flag flown throughout the Seneca Nation Territories in recognition of pride month. Olivia’s inspiration for this idea originated from the Opaskwayak Cree Nation in Canada, whom themselves raised their own rainbow flags in 2020 and called for other Indigenous Nations to follow suit.

To me, there is much more meaning to hanging the flag. It will show those who live and visit our lands that this is a Nation that welcomes everyone, regardless of who they love or how they identify.

Assisting her in the process or getting through the “red tape” wasn’t an easy task. But for me it felt as an obligation. I have been involved in the affairs of the Seneca Nation since I was fifteen, serving in our Executive, Legislative, Judicial Branches as well as serving as a Government/External Affairs Fellow, Youth Ambassador, and now as the youngest elected official in the history of our Nation. I took that as being a voice for so many who have been voiceless for so long. My uncle, Rod, who passed in 2010 was a member of the LGBTQ2S+ community. He faced so much discrimination, was hurt, and belittled throughout his life because of who he was. But he never reciprocated that hate. He was, and is, still an inspiration to me and many others. He taught us that even though people around you, even those close to you, may spew hate, but we must never let that stop us from being the person we want to be. That we must persevere.

I’m proud to say that we succeeded. The late and great Congressman John Lewis said, “Never, ever be afraid to make some noise and get in good trouble, necessary trouble.” I’m so proud of Olivia for pushing this across the finish line. I’m happy I was able to help be an advocate for such a worthy cause, as it wasn’t easy, but necessary.

On Friday June 11th, the flags were flown on the sovereign territories of the Seneca Nation that are the Allegany, Cattaraugus, Oil Springs, Niagara Falls, and Buffalo Creek territories. My hope that this sparks a beginning of a new future in our Nation that’s built on inclusivity, representation, and equality. Finally, my closing message is that we must always strive to be voices for the voiceless. We must strive to grow our communities into a “more perfect union”. It is always worth fighting for what is right, even if it’s not the most popular. Leave a lasting legacy for those that will come after you, it is what our ancestors not only fought for, but it is what we need.