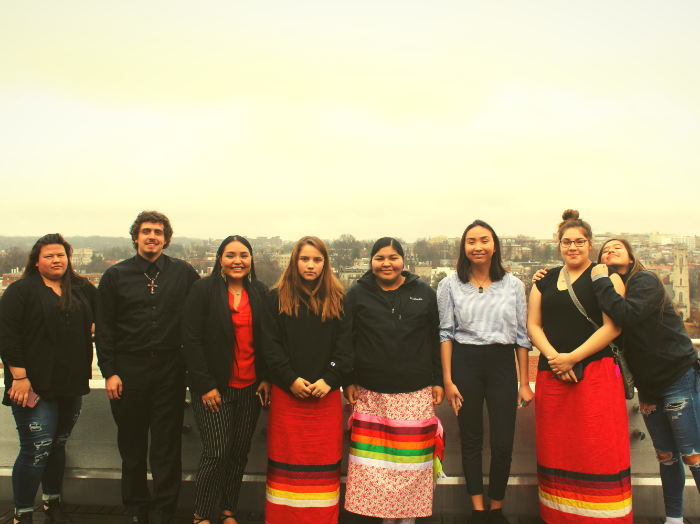 February 10-15, 2019 marked the 7th annual “Champs Week”, a time for the newly-named 2019 Champions for Change — Autumn, Adam, Charitie, Shandiin, and Madi — to join the Center for Native American Youth (CNAY) in Washington, D.C. for a week of advocacy, change-making, and celebration.

The week began on Sunday evening with a welcome dinner where CNAY staff, Champs, and invited guests got to know one another and to relax after a day of travel over a meal at Carmine’s Italian restaurant.

The 2019 Champions began their day on Monday with the National Congress of American Indians (NCAI) State of Indian Nations address at the Newseum. Accompanied by the MHA (Mandan, Hidatsa, Arikara) Nation Champions, the group heard from NCAI President Jefferson Keel and Representative Deb Haaland. The group was extremely excited to hear one of the first two Native women in Congress speak at the event and to learn from her experience.

After the event, the Champions debriefed to discuss the topics covered at the State of Indian Nations. The Champions noted a lack of prioritization of Native youth, which also prompted discussion among the young leaders. The leaders discussed the importance of promoting education, mental health, and youth civic engagement in tribal communities. The afternoon was filled with training sessions for the Champions and their “Champerones,” friends and family who traveled to support the Champions. The Champions attending a training with Associate Director, Nikki Pitre, and our Newman’s Own Foundation Fellow, Jen Peacock, on the importance of narrative sharing and leadership. The Champions worked on creating posters that included their strengths, their areas of growth, their questions about life, which helped them to understand their leadership style. The “Champerones” met with Policy Program Coordinator, Aaron Slater, his mother, Faith Roesell, and Jeremy Schimmel, father of 2017 Champion Samuel Schimmel, to discuss their roles in mentoring and empowering the 2019 Champions.

On Tuesday, Champions began with a Communications 101 session delivered by founder of Parrish Digital, Jaynie Parrish and CNAY Communications Coordinator, Joshua Bertalotto. Their presentation showed the Champs the importance of social media in advocacy work, constructing your online narrative, and using social media to grow their network of support.

Following this session, Champs met with former Secretary of the Interior, Sally Jewell. She provided the Champs with guidance in their initiatives, stories of her time in the Obama Administration, and a promise to assist the Champions in any way possible, including meeting with Champion Autumn Adams in their home state of Washington.

The Champions then met with Associate Director of CNAY, Nikki Pitre, and Vice Chairman of the Tohono O’odham Nation, Verlon Jose, the two moderators for this year’s panel event at The Aspen Institute. The panel was well attended, with a packed room and many tuned into the live stream, which can be viewed here. The Champions spoke about their individual initiatives, their communities, and about how they intend to further their plans for change over the next year.

In her opening remarks, Secretary Jewell affirmed the importance of investing in Native youth and their futures. “This is about youth,” said Sec. Jewell. “For those of us in positions of leadership, power, or wealth, it’s our obligation to listen to these young people and think about how we can be part of the solution to creating a brighter future.”

Finally, on Tuesday evening, Champions were honored at CNAY’s 8th Anniversary Reception. The reception included remarks from Senator Byron Dorgan (ret.) and CNAY Executive Director Erik Stegman. The Champions received medals from tribal leaders in or near their own community.

This year, Executive Director Erik Stegman presented Representatives Deb Haaland and Sharice Davids with an “Honorary Champion for Change” award in honor of their election as the first two Native women in Congress. Rep. Sharice Davids was able to attend and spoke to the Champions and audience about the importance of their work, their voice, and their representation.

Rep. Haaland was unable to make it but received her award from the Champions in her office on Capitol Hill. Rep. Haaland was able to meet with the Champions on Thursday while they were on Capitol Hill. The 2019 Champions asked her questions about how she stays tied to her community and about the importance of Native representation in Congress. CNAY thanks Rep. Sharice Davids and Rep. Deb Haaland for their hospitality and mentorship of the 2019 Champions.

On Wednesday morning, Champions began with an Advocacy 101 session delivered by Executive Director of CNAY and a former congressional staffer, Erik Stegman. Erik’s presentation gave Champs an overview of the how he ended up working in Congress, the difference between the House and Senate chambers, what to expect in a congressional meeting, and helping the Champs work on their “ask” to their elected officials.

On Wednesday and Thursday, the Champions took to Capitol Hill to share their work with their Congressional representatives. Autumn, Adam, Charitie, Madi, and Shandiin put their week of trainings and discussions into action as they advocated for the issues that they’re passionate about.

On Thursday morning, the Champions met at the CNAY office to be interviewed for the 2019 Champions for Change class video before heading back out to the Capitol for their group photo.

The week concluded with an official congratulations on the Congressional Record given by Representative Raúl Grijalva. CNAY and our 2019 Champions for Change would like to acknowledge the Congressman’s long-time support of Native American youth.