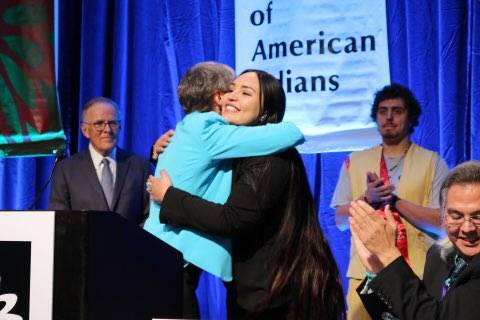 On Tuesday, February 12, the Center for Native American Youth (CNAY) hosted a public panel and an annual reception celebrating the 2019 Class
of the Champions for Change, Adam, Autumn, Charitie, Madi, and Shandiin.

The public panel event was held at the Aspen Institute in Washington D.C. and featured an introduction by CNAY Board Member and Former Secretary of the Interior, Sally Jewell. In her opening remarks, Secretary Jewell affirmed the importance of investing in Native youth and their futures.

“This is about youth,” said Sec. Jewell. “For those of us in positions of leadership, power, or wealth, it’s our obligation to listen to these young people and think about how we can be part of the solution to creating a brighter future.” Champion Madi White of the Mohawk Nation at Akwesasne expressed the importance of preserving Indigenous cultures and language. “Every time an elder dies, the culture goes with them,” said White. Madi shared her experience with the power of language and culture, and the sense of purpose that connection to culture provides to Native youth.

If you were not able to attend or tune in live, the public event is available to watch here. On Tuesday evening, CNAY hosted its 8th annual anniversary reception at the Capitol Hilton Hotel. The event commemorated CNAY’s 8th anniversary and served as another opportunity to honor our 2019 Champions for Change. Each Champion introduced themselves, explained their initiatives,
and mingled with tribal leaders throughout the evening. At the end of the evening, CNAY and the 2019 Champions presented awards to its 2019 Honorary Champions for Change, Representatives Sharice Davids and Deb Haaland.

Haaland was unable to attend the reception but made time to meet with the Champions in her office on Capitol Hill. She shared with them words of encouragement
as they met with their elected leaders throughout their Hill Day program. The 2019 Champions will spend Wednesday and Thursday on Capitol Hill, meeting with their elected leaders and advocating for their issues and communities.