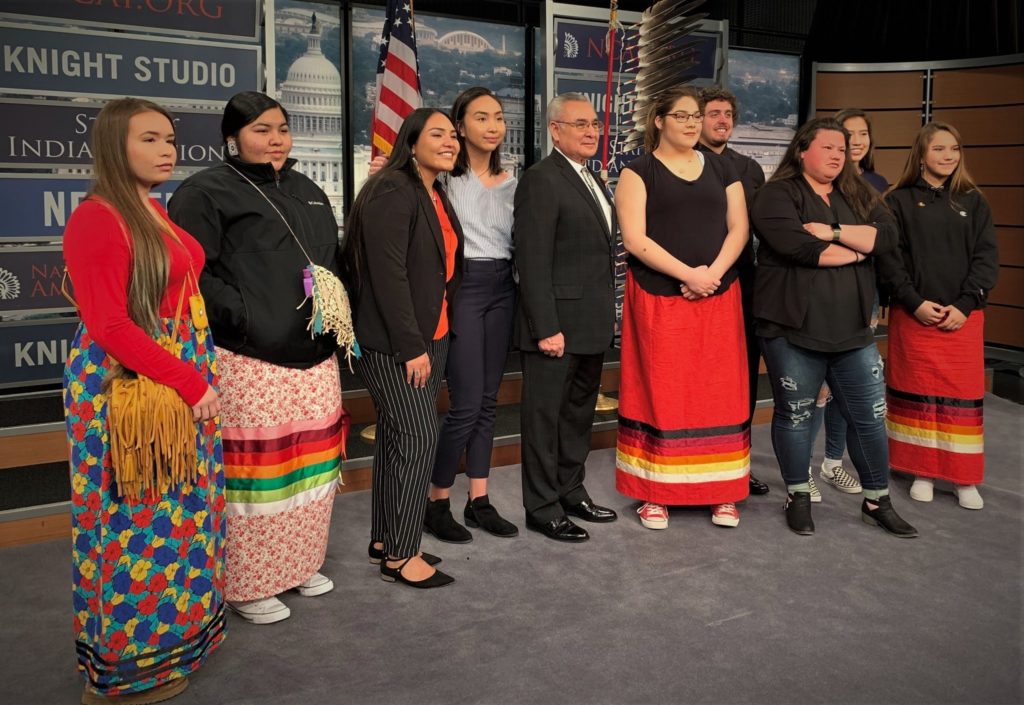 On Monday, February 11, the 2019 Champions for Change, Adam, Autumn, Shandiin, Charitie, and Madison attended the State of Indian Nations
address, hosted by the National Congress of American Indians. The 2019 Champions were joined by youth from the MHA (Mandan, Hidatsa, and Arikara) Nation Champions, a local youth leadership program. The event marked the 17th annual update on the State of Indian Nations and included a response by Representative Deb Haaland, one of the first two Native women elected to Congress.

Throughout the address, President Keel spoke of the resiliency and strength of tribal communities, remarking that tribal leaders hold the future of the
next generations in their hands, and that means holding themselves to higher standards. Additionally, President Keel remarked on the many Native people who ran for office and won this past year, from the two first Native women elected to Congress to Peggy Flanagan in Minnesota, who became the first Native woman elected to serve as Lieutenant Governor.

2019 Champion Shandiin Herrera, following the address, expressed her hope that the representation of Native peoples in positions of leadership will continue to grow.

“It was really empowering to hear from our Native leaders about the ways in which they are advocating and initiating change for Indigenous communities across the country,” said Herrera. “I believe there is tremendous growth in the representation of Native people when nations come together to support our communities, as was seen during the government shutdown. It was very surreal to attend an event hosted by Native people, for Native people, and in this Nation’s Capital. I left, not only feeling inspired, but feeling a sense of hope and guidance for the work I aspire to do for my community.”

In her response to President Keel, Rep. Deb Haaland began with acknowledging that for the first time in history, Native American women are represented in Congress. Rep. Haaland spoke about the history of basket weaving among various tribal cultures, noting that tribal communities are privileged to know their past so that Native children can make futures of their own.

2019 Champion Charitie Ropati remarked on the power of seeing a Native woman speak about women’s issues.

“I really enjoyed Deb Haaland’s transparency on the sexism that exists in tribal councils. She fought against that narrative by running for Congress and she won. She is not only one of the first Native Americans in Congress, but she is a woman. This speaks volumes of how powerful Indigenous woman are,” said Ropati.

The 2019 Champions debriefed at the Aspen Institute following the event. In the discussion, Champions noted that there was not enough emphasis on empowering youth or improving educational systems.

“They should have addressed the issue of education and the discrepancies that exist within the educational experience of Indigenous youth, because our voice matters,” said Ropati.

In closing, Rep. Haaland left the audience of tribal officials and youth leaders with a message of hope and inspiration, saying, “You can create beauty as long as you remember that every day is a good day to be Indigenous.”

RSVP for the panel discussion with the Champions for Change here.

"I have been told that my dream of helping other Native youth is ridiculous and that I should give up. I realized that negative comments won’t hold me back. I will make my dream a reality."