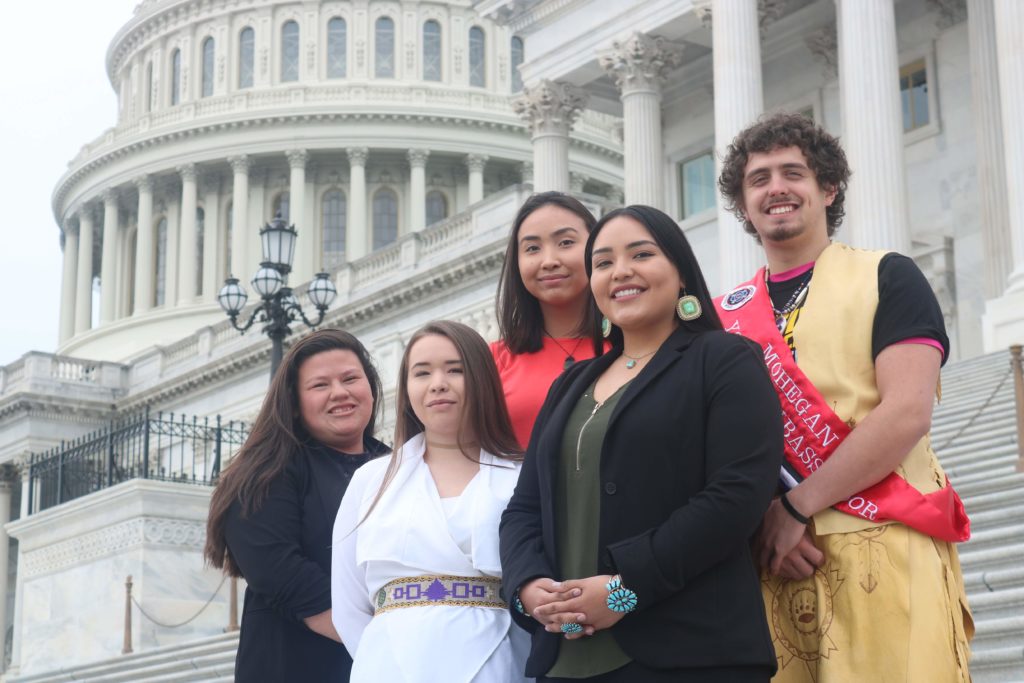 On Wednesday and Thursday, February 13 –14, the Center for Native American Youth (CNAY) joined the 2019 Champions for Change — Autumn,
Adam, Madi, Shandiin, and Charitie — on Capitol Hill. Throughout the two days, the Champions each attended meetings with their elected officials in
Congress to advocate for their tribal communities and their individual initiatives.

In the first meeting on Wednesday, Champion Shandiin Herrera of the Navajo Nation met with newly elected Senator Mitt Romney of Utah to discuss engaging Native youth in the political process. Shandiin described her efforts to increase voter turnout in San Juan County, which now has a majority Navajo county commission. Champion Madi White of the Mohawk Nation at Akwesasne had the amazing opportunity to meet with Senate Democratic Leader Chuck Schumer and staff to discuss issues in her tribal community, which spans the border of Canada and the U.S. Madi discussed the importance of maintaining traditional culture and language, which she believes will bring empowerment to Native identity and solidify ties to cultural traditions for many youth. Champion Adam Soulor of the Mohegan Tribe spoke about his work to create a youth council with Rep. Joe Courtney of Connecticut. Adam shared
his work as Youth Ambassador for the Mohegan Tribe. The two spoke about the importance of keeping Native youth connected to their culture and to each other. Following the first day of meetings, the 2019 Champions were able to meet with newly elected Rep. Deb Haaland, one of the first two Native American women in Congress. The Champions presented Rep. Haaland with an honorary Champions for Change award. Rep. Haaland spoke to the Champions about the importance of Native representation in government and her new role as a Congresswoman. On Thursday, the 2019 Champions returned to Capitol Hill for another day of meetings with elected officials.

Champion Charitie Ropati from the Native Village of Kongiganak met with Senator Dan Sullivan to discuss issues relevant to the Alaskan education system. Charitie advocated for better inclusion of Alaska Native history in Alaskan studies courses throughout the school system. Following the two days of meetings, the Champions were able to sit down with staff members from the Native American Congressional Staff Association for a dialogue about working on the Hill. Questions from the Champions covered asking staff about their day to day schedule to questions about how they work for Native communities while being so far from their own homes.

Read more about Champions Week 2019, the State of the Indian Nations Address, our 2019 public event and reception, and more about CNAY on our blog.