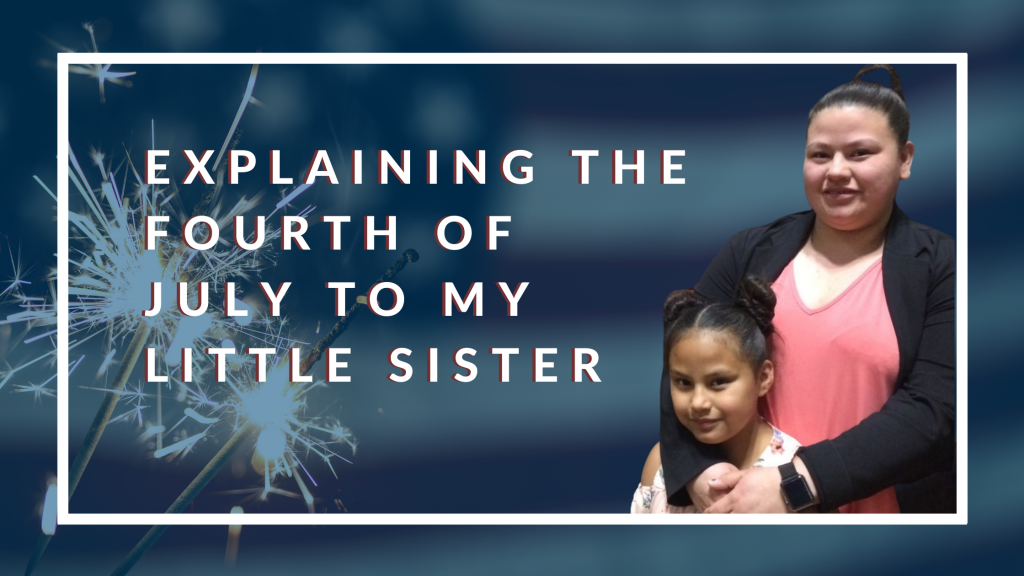 Explaining the Fourth of July to my little sister

By: Autumn Adams, Confederated Tribes & Bands of the Yakama Nation, Center for Native American Youth’s Youth Advisory Board Member and 2019 Champion for Change

I struggle every year with how to explain the Fourth of July to my sister. When she was seven years old, the only thing she understood was being allowed to light fireworks. As she has gotten older and has begun expanding her education past the confines of western limitations, her questions have grown more and more challenging. My little sister is eleven years old.

Just last week she walked into the kitchen as I was cooking and asked point blank, “why do Native people celebrate the Fourth of July when all it did was take away our freedom?” I watched my little sister’s mind begin to put things together about the true history of this country, and her role as a Native American. I knew this conversation was coming. As her older sister and caretaker, I just wasn’t sure how to fully answer that question. I asked myself: how far back should I go? How long should my answer be? How much will she understand? I eventually settled on telling her what I understood about the Fourth of July and then explaining that I, myself, am still learning and that it never really stops.

In my opinion, calling the Fourth of July “Independence Day” is one of the biggest examples of privilege I can name. July 4, 1776 should be recognized for what it is in its entirety: not just the beginning of separation from England, but the formal continuation of American imperialism and colonization.

I had to explain to my sister… all of the atrocities that were and continue to be committed against our people so she could recognize it for what it was: assault.

I had to explain to my sister… that their obtaining of freedom was the cementing of our fate, on the land we originally inhabited. The atrocities we as Indigenous peoples face daily, the startling statistics we have to live with, and the ongoing obstacles of just existing while being Indigenous.

I had to explain to my sister… why she can’t be like her friends and walk alone in the store, or walk at the park by herself, why I sit and watch her every single soccer practice.

I had to explain to my sister… that because she is as an Indigenous woman, she is more likely to be subjugated to violence, more likely to go missing or be murdered, to be raped or sexually assaulted when she came home asking questions after she had sexual education class in school.

What I am realizing as I raise my little sister, in doing my best to answer all of her questions is that whether it be about her body and sexual health, or about the fourth of July—I must answer with the deeply rooted knowledge that as an Indigenous woman and caretaker that everything forced upon us– poverty, racism, addiction, abuse, loss of identity is the constant reminder that we live in a country whose definition of freedom was not meant to include us. It is a painful truth I carry knowing I had to take part of her innocence away in, but more important, I have a responsibility to explain these truths to my eleven-year-old sister.

I remind my little sister… that we are descendants of strong and powerful leaders who survived genocide. I know that I am the generation of change. It is my responsibility to clear a path for my little sister, and the future generations.

I remind my little sister… that we are more than stereotypes. We are the next generation of authors, veterinarians, professors, lawyers, engineers, directors, CEO’s, presidents, social workers, and change-makers. We will continue to reclaim our independence, and I do that with every conversation I have with my little sister.

While the Fourth of July is a federal holiday, to me it is a reminder of our resiliency and the bright future we can shape together.

Autumn Adams is a member of the Confederated Tribes & Bands of the Yakama Nation. Autumn serves on the Center for Native American Youth’s Youth Advisory Board and was recognized as a 2019 Champion for Change. Autumn is among the 2020 class of Foster Youth Interns through the Congressional Coalition on Adoption. Autumn lives in Washington State and raises her two siblings