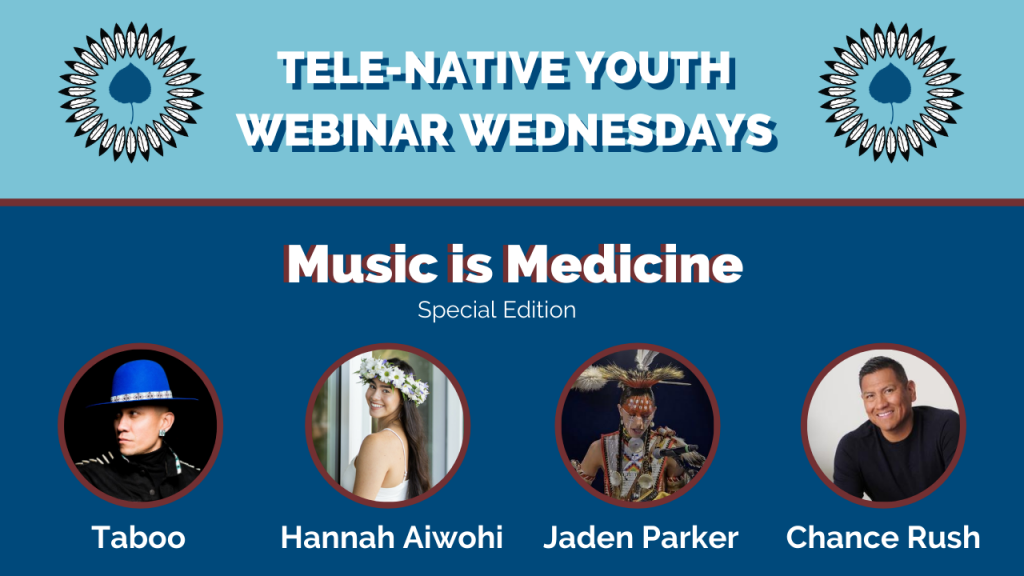 Music is Medicine Part I

This Special Edition of Tele-Native Youth is exactly what our listeners needed. In the hour-long discussion, we talked about the styles of music and what it has done for them in their growth. It was humbling to see both Hannah and Jaden on the same platform as internationally known Taboo of the Black Eyed Peas. All three panelists did an amazing job working, encouraging, and piggy-backing off of each other’s comments. This collaboration was very well organized and set up by the Center for Native American Youth at the Aspen Institute.

I first asked Hannah about what it meant to her to have music in her life and mentioned to her that she was the first Native- Hawaiian relative on Tele-Native Youth. Even at her young age, you could hear the passion and wisdom in her answers and comments. I think it meant something to her that she was the first because she was very detailed and dug deep to deliver her responses. It was fascinating to learn what music means to her community and how valuable it is, to a point were her community competes to see who is the best. She studied, training, and developed at the Kamehameha School, which was endowed by the Native Hawaiian Prin-cess Bernice Pauahi Bishop. Hannah shared that while attending Kamehameha in 2019, her all-female singing group defeated the boys singing group to win a large award. She and her group were prepared to compete again and defend their title but due to COVID19, they were unable to do so. She became very relaxed and passionate as she spoke more and more about the meaning of the music and the chants that she has learned over the years. She concluded her portion of the webinar with a beautiful song that promoted togetherness and it was true medicine to our ears.

Jaden is a twenty-year-old smoke dancer and singer who has been traveling throughout Indian Country as well as internationally to teach and entertain. He shed light on music that it doesn’t have a wrong or a right but a just getting better. He shared that music is a process and will always have meaning somewhere. His statement “Sometimes you have to stand in front of a mirror and sing and dance to yourself” was a highlight because it reminded us that we have to find our great for ourselves. He shared how important it was to have that balance with our traditional ways in modern times. Jaden also taught during this panel that our music is a responsibility and a gift to have and to share. It was impressive that he had this old spirit like Hannah in his delivery and songs. We were blessed to also have him close out the webinar with a closing song.

And lastly, we were grateful to have Taboo join us on Music is Medicine. I talked about how he always makes sure that he promotes being Native American in his success. He shared with the listeners that when he’s on the big stage or TV, he feels that all his relatives are on that stage and spotlight with him because he is about God and his people. He talked about how music got him through losing his grandma and how it gave him the purpose to fight cancer and revive his tribal heritage.

I am so grateful to the Center for Native American Youth for giving me the privilege to moderate this session. I learned a lot about music and can’t wait for part two of the “Music is Medicine” series. After this session it made me thankful that I chose to have music in my life.

Chance serves as a consultant to tribes and organizations in reference to business, community outreach, staff trainings, and curriculum development.  His passion for strengthening Native communities combined with his experiences led him to the development of Cloudboy Consulting,  LLC. Chance travels throughout the United States and Canada to work with Native communities in efforts to inspire, heal, motivate, and energize. He has a talent for using his energy and humor to spread a simple message, “Use your personal talents to lead you to greatness.” He promotes healthy living and lives his life alcohol and drug free.

"I want to help knock out stereotypes because Native Youth should be confident in their identity. These outcomes need to and will change in my community, even if it takes years."