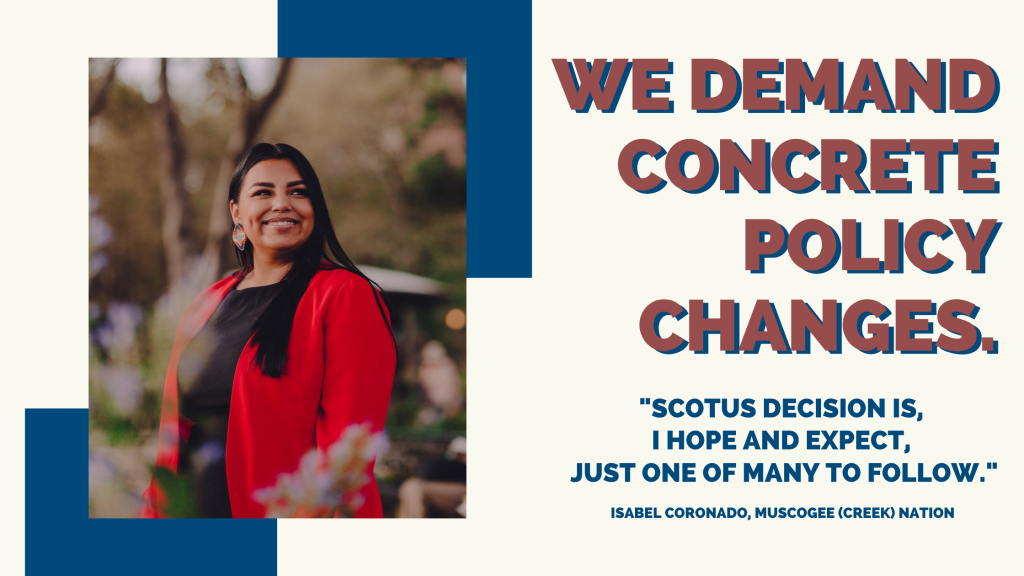 We demand concrete policy changes. SCOTUS decision is, I hope and expect, just one of many to follow.

Hesci, my name is Isabel Coronado, my tribal town is Thlopthlocco and I’m from the Wind clan. I am a citizen of the Muscogee (Creek) Nation from Okmulgee, Oklahoma. I am currently a Policy Entrepreneur at the Next100 where I focus on criminal justice reform policy impacting Indian Country.

When I woke up this morning the first piece of news I saw came from my mother, telling me that the Supreme court ruled that our tribe — The Muscogee (Creek) Nation — won its long-standing claim to the eastern part of Oklahoma. This means the Supreme Court recognized a treaty that gave parts of eastern Oklahoma to the Muscogee (Creek) Nation when they arrived from the trail of tears and they now have the legal authority along with the Federal government to convict Native people who commit a crime on their land. Leaving out state and local officials who in the past stepped in to prosecute those crimes, but now don’t have the legal authority to convict Native people of crimes on Native land.

Naturally, I was filled with excitement. I mean how many times in a lifetime does one get to hear about white dominant systems doing the right thing for BIPOC? These last couple of weeks have been filled with surprising wins for Indian Country, from the Dakota Access and the Atlantic Coast pipeline being closed down, to sports organizations realizing the longstanding consequences of their racist team names.

While I was celebrating with memes and sharing the latest news articles I thought it wise to read the 86 page brief to fully understand the ruling of the case. There are several key takeaways:

I feel multiple connections with this case. I feel connected through my criminal justice work and my lived experience as being a former child of an incarcerated parent. I helped develop an organization in Oklahoma that worked to reintegrated Native people back into society and their Tribal communities. I know the deep-rooted issues Oklahoma has with mass incarceration especially when it involves Native people:

So this gives me hope. I look forward to the new jurisdiction under the Tribe and Federal government and the efforts for decarcerating our prison system and keeping Native families connected.

As a Native youth, a sort of retraumatization and physical visceral response happened when the Justice laid out the long-standing Federal policy to assimilate Native people. The language in the opinion laid out this country’s step by step plan to eradicate Native Nations. This plan started with the removal from our ancestral homelands on the Trail of Tears and continued through the allotment era’s land and power grab designed to phase out Native land ownership. Today’s court decision is a win for Tribes and gives a huge opportunity to reclaim inherent rights that will strengthen the Nation and ultimately empower Native youth.

“On the far end of the trail of tears was a promise,” said Justice Neil Gorsuch in his opinion for the court. Well, let me say: I’m tired of hearing the word PROMISE. It’s never meant the same thing to your ancestors as it did to mine. We demand concrete policy changes. Today’s court’s decision is, I hope and expect, just one of many to follow.