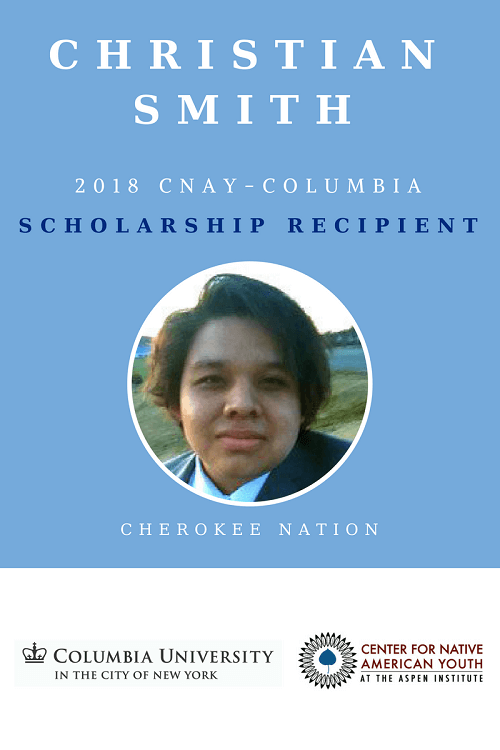 The Center for Native American Youth partners with Columbia University to offer a full-tuition, residential scholarship for one Native student to attend Columbia’s Summer Immersion Program for High School Students.

CNAY is pleased to recognize Christian Smith as our 2018 CNAY-Columbia Summer Scholar!

Christian is 18 years old, a citizen of the Cherokee Nation, and a junior at Sequoyah High School in Tahlequah, Oklahoma. Despite challenges and a lack of positive role models in his small hometown of Stilwell, Christian stays focused and strives to make a good impact on those around him. He grew up immersed in his culture and surrounded by his tribal community, and says that those experiences, along with his supportive mom, were protective factors that helped him avoid negative influences.

Christian has seen how stereotypes and misrepresentations of Native Americans in popular culture have permeated the media. He has a passion for film and sees it as an art form that can battle those misperceptions. Christian is inspired by film’s ability to “convey and channel a whole wonder of emotions, messages, and stories”. Film is his true passion, and he is excited to share his ideas for stories with a wider audience.

Christian plans to take the Digital Filmmaking: From Initial Concept to Final Edit course during his 3 weeks at Columbia, enabling him to further explore his passion for representation and storytelling through film. Christian will use the course as an opportunity to share his community’s stories with the world. He hopes the recognition he gains from this award will inspire other youth in his community to achieve their goals as well. Congratulations, Christian!

To learn more about CNAY’s partnership with Columbia University (including how you can be part of expanding opportunities like this for more Native students), contact our team.

“I would like use my education and my leadership roles to serve my people through enhancing policies for Navajo families living on the reservation.”