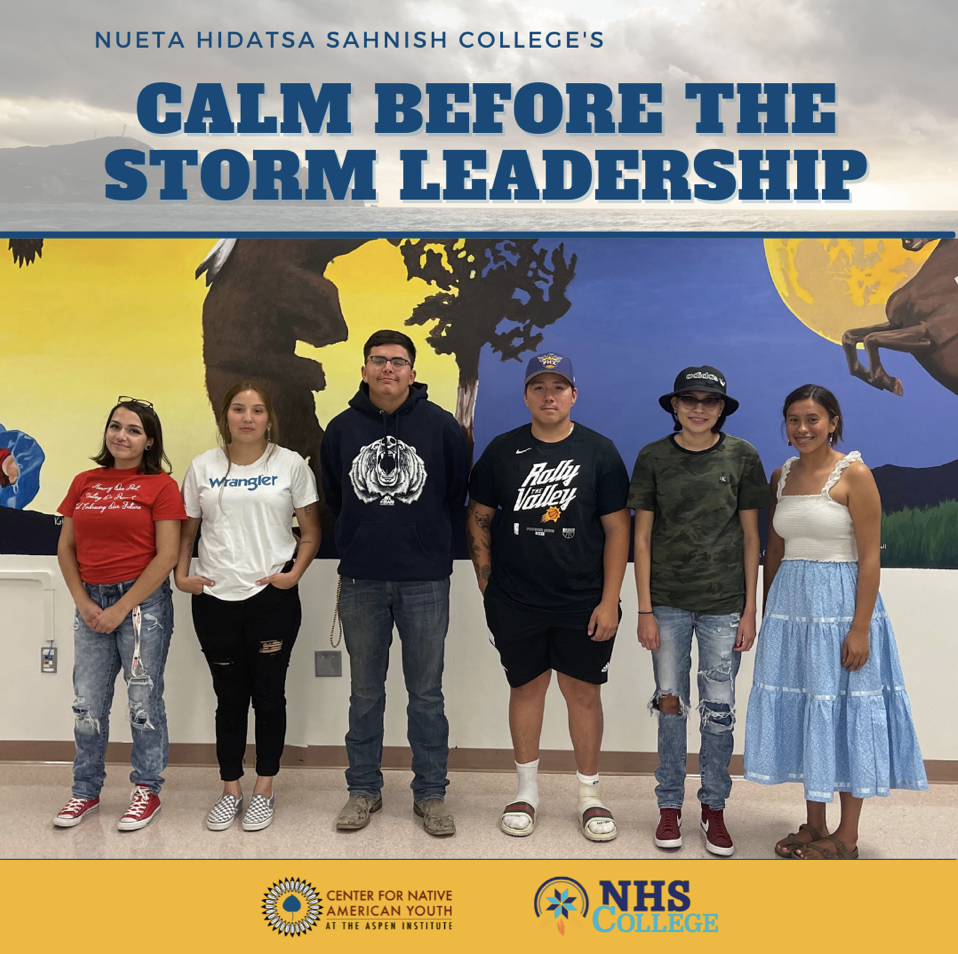 The Calm Before the Storm Leadership

In early July, the Center for Native American Youth (CNAY) announced the first cohort of the Calm Before the Storm leadership program housed at the Nueta Hidatsa Sahnish College on the Fort Berthold Indian Reservation in North Dakota. Selected to the cohort were Tiana Dubois, Irene Hale, Daun Dixon, Shooter Stewart, Jonna Brady, and Keishawn Johnson. Shortly after the formal announcement, the CNAY team, along with members of the Aspen Institute’s Communications team, traveled to the Nueta Hidatsa Sahnish, also known as the Mandan Hidatsa and Arikara, lands to conduct various leadership trainings with the student leaders.

Upon arrival, CNAY staff were given a community tour and a tour of the Nueta Hidatsa Sahnish College (NHSC), founded in 1973. The group also met with NHSC staff including President Dr. Twyla Baker who shared how excited she was to see the youth grow in their leadership. “My hopes for the future for our youth is that they understand that everything they need is already within them,” said Dr. Baker.

After touring and leaving offerings of thanks to the lands, the CNAY staff began the first evening of training with the student leaders. It started off with ice breakers led by the CNAY communications staff Cheyenne Kippenberger and Kyra Antone. All participants were up, moving, laughing, and getting to know each other, which made for a great training environment!

The trainings that followed included Defining and Identifying Leadership and Narrative Sharing. During the leadership training, CNAY Program Manager Cheyenne Brady asked the leaders to share qualities they believe leaders should have. Youth then shared a time when they had to exercise these qualities. During the narrative sharing training, youth conducted exercises aimed to increase confidence in sharing their individual narratives. All exercises conducted encouraged the youth to see themselves as leaders and gain confidence in themselves. To close the evening, CNAY Executive Director Nikki Pitre encouraged the cohort to lean on each other throughout their leadership journeys. She also reinforced the notion that youth are and can be leaders of our people, regardless of age. Pitre stated, “Mentors and leadership don’t need to always come from people older than you, it also comes from people who are younger than you.”

The second evening of training began with youth exercising their newly polished leadership and narrative sharing skills via recorded interviews with Pitre and the Aspen Institute’s communications team. The youth shared their stories and reflected on the program (see below). After interviews, Project Development and Community Organizing trainings were conducted. Youth developed their community action projects and gained and understanding of how to successfully implement and mobilize their communities to create the change they wish to see. Youth planned to create change in areas including youth substance abuse and mental health, cultural and language preservation, access to sports and support for young parents.

CNAY is honored to be a part of the leadership journeys of Tiana, Irene, Duan, Shooter, Jonna and Keishawn. The staff will continue to support the youth leaders throughout their project implementation phases and through their leadership journeys. Projects are expected to be completed by the end of November.

“Leadership is guiding others.”

“Leadership to me as a Native means taking the initiative.”

“Being a leader means being a role model by setting good examples.”

“When I look at my elders I get a lot of strength, or even young people, how much knowledge they have.”

“Leadership is to put forth your knowledge or you experience for others.”

“Being a leader is taking charge, it takes courage.”

“Tomorrow is not promised. The Creator can take a fluent speaking elder any day, so I feel it is my duty to step up and save our language. Now is not the time to turn our backs on learning our languages, customs, or culture. If we turn away now, we lose our identity as Natitaytma (Native Americans).”

Confederated Tribes and Bands of the Yakama Nation, 2018 Champion for Change