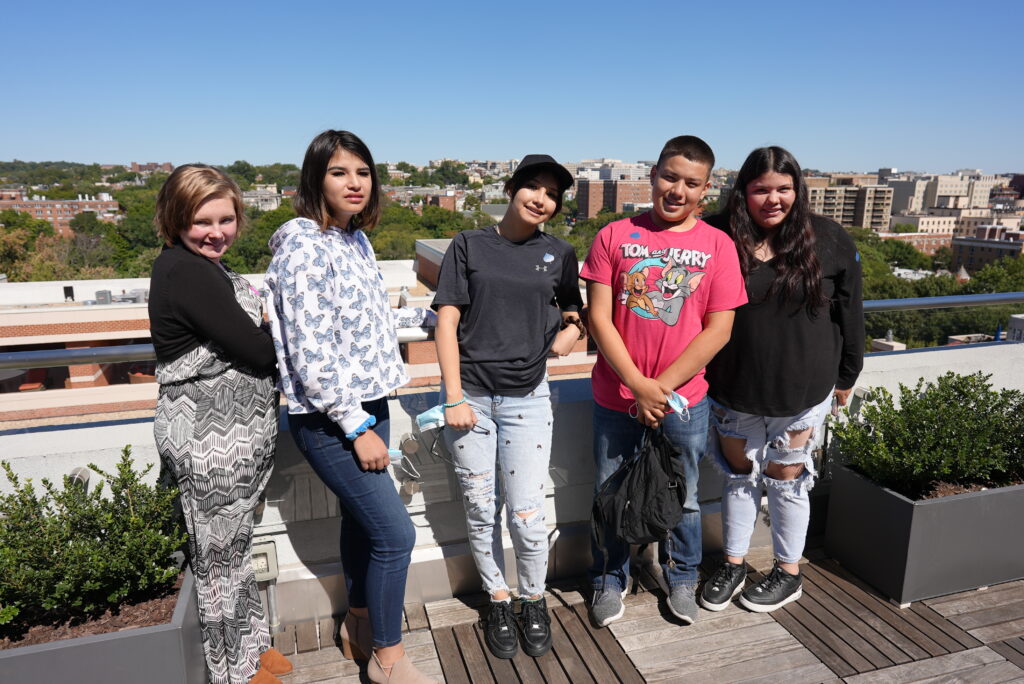 The Center for Native American Youth and the Cheyenne River Youth Project’s Growing Into Wowachinyepi train at the Aspen Institute in Washington D.C

Staff and youth began the day by introducing themselves, sharing their expectations and hopes for their time at the Aspen Institute. For most of the youth, this was the first time they had been on a plane. “I am open for a good experience and to learn a lot so that I can go home and share it,” said CRYP youth leader Jordyn.

After introductions, CNAY Youth Advisory Board Vice Chair Isabel Coronado and CNAY Youth Advisory Board Chair Anthony Tamez-Pochel led a youth ice breaker where staff and youth worked together to create tiktok’s that highlighted each youth’s positive change initiative and promoted the importance of Indigenizing spaces. This led into the next session, also led by Anthony and Isabel, titled Indigenizing Spaces. “It’s really important to understand that you guys hold power, you make decisions too,” said Isabel. Anthony posed a question to the group, “Can you Indigenize spaces that are colonial, or can you just create safe spaces for Native people and people of color in those spaces?” He continued, “Once those people are gone, will those spaces remain Indigenous?” These questions evoked much thought on whether the spaces we Indigenize are Indigenized temporarily or permanently.

Anthony and Isabel then shared the importance of public speaking, speaking up and utilizing one’s voice in all spaces. They reminded youth that it is okay to be nervous. “What matters is you got up,” said Anthony. Isabel reminded youth that it can be difficult when sharing personal stories, “You always want to take space for yourself, and feeling comfortable with what you share is important.”

Before beginning the next training, youth shared their positive change projects with the group. Projects ranged from mental health support to community resources and youth advocacy. The youth focused on community based projects in hopes to create a better space for themselves and their peers.

CNAY’s Director of Research and Evaluation Dr. Billie Jo Kipp led a session on historical trauma, explaining to youth leaders the impact it has had on many generations. “We experienced the trauma, it’s transferred to us and that impacts us, and we can start devaluing ourselves,” said Dr. Kipp. As she continued, she says it is important that we learn to heal and be proud of who we are. “Our spirit is one of resilience, and when we can show the story to mainstream society, we are still here and we still survived, we Indigenize spaces.”

Youth ended the day by reflecting and creating an action plan for their projects. Cheyenne Brady, CNAY programs manager, reminded youth of the importance of listening to their peers and supporting them as well. “In the way that your voice matters, others voice matters as well,” said Brady.

Youth leaders started the day at the Dirksen Senate Office Building where they had scheduled meetings with their Senators of South Dakota, Mike Rounds and John Thune. As students waited for Sen. Rounds in the lobby of his office, they admired the bison hanging on the wall and the tribal flags posted across the lobby. They were then given a tour of the Senator’s office, by a tribal member who worked in the office. He showed them the Senators, meeting space, and the pods where his team works, encouraging youth to apply for an internship during the summers.

Youth were then given the opportunity to ask questions. One youth started a conversation about South Dakota banning teaching Native American History in schools. Utilizing her tools of leadership and experience she said, “My teacher told me he would like to teach us it because it is important, but he can’t”. The Growing into Wowachinyepi leaders did an amazing job speaking up about the issues they see present in their daily lives. Senator Rounds spoke with youth and thank them for their time.

Youth then made their way to the office of Senator Thune. Unfortunately, Senator Thune had been called to Senate duties. However, youth were given the opportunity to tour his office. One youth admired a Native American doll that stood in his office, and another found more interest in the basketball, with a painted eagle feather on it, that sat in the glass case next to his desk. The Secretary by the name of (NAME) had spoken with youth on some of the work that Thune had recently been doing, as well as encouraged youth to ask any questions. Youth told them about the work they had been doing with CRYP and CNAY and how they hope their projects will impact their communities.

After the tour, the youth made one last trip to the capitol building. As they made their way across the field to take a better view, their ribbon skirts touched the grass, gently leaving a trace of their Indigeneity on the paths they began to carve out. In this time, though they may not have known it, they visibly Indigenized the spaces they were present in and will continue carving this path once their visit at the Aspen Institute in Washington, D.C is over.

To end the visit youth recorded interviews sharing their experiences and what they had learned while visiting CNAY headquarters. As youth began to share a more detailed plan on how they expected to execute their projects, staff stood behind the camera admiring the newfound confidence that was present in each youth’s voice. Months of support, guidance, and encouragement showed up in the way that the youth carried themselves on the final day. On this day, they were reminded that they belong in all spaces, and that they are the young leaders who are molding those same spaces for the next generation.

"I want to help knock out stereotypes because Native Youth should be confident in their identity. These outcomes need to and will change in my community, even if it takes years."