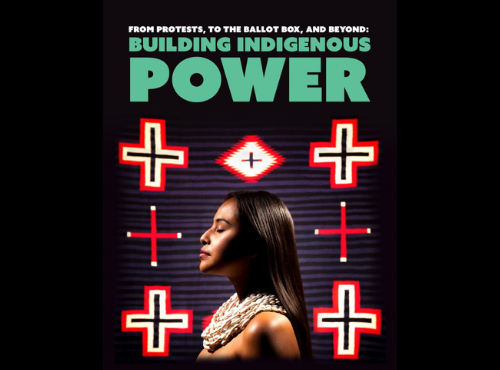 With 6,460 participants representing 401 tribes from all 50 states, the Indigenous Futures Survey unveils the needs, priorities and perspectives of Indigenous Peoples

Washington, DC, October 26, 2020- The Center for Native American Youth (CNAY), IllumiNative, and Native Organizers Alliance released the first annual Indigenous Futures Survey (IFS) conducted by researchers at the University of Michigan and the University of California, Berkeley. The Indigenous Futures Survey is the first of many steps towards understanding the motivations and changing beliefs of Native communities to correct the inaccurate portrayals and lack of visibility of Tribal communities.

From June 23, 2020 to August 15, 2020, 6,460 Indigenous peoples from across the U.S. participated in the largest and most comprehensive study ever conducted in Indian Country. The aim of the survey was to understand the priorities, needs and perspectives of Natives peoples on several key issues such as COVID-19, the presidential election and systemic racism. The COVID-19 and political reports provide insight on the direct impact of COVID-19 on Native communities, why Native communities were disproportionately hit by COVID-19, the consequences of the lack of federal government aid, voting, key battleground states, political and civic engagement, voting behavior, and voter suppression.

“We are grateful for the opportunity to learn from and amplify the voices of our relatives throughout Indian Country,” says Nikki Pitre, Executive Director of the Center for Native American Youth. “The survey findings firmly establish the priorities of our people. It is now up to all of us to elect those whose platforms are reflective of addressing those priorities.”

“I’m grateful for all of the participants, partners, researchers, and grassroot organizations that helped make this possible,” said Crystal Echo Hawk, Founder and Executive Director of IllumiNative. “The findings of the Indigenous Futures Survey reveals the true power of the Native vote. For so long, Native peoples have been silenced by voter suppression tactics and oppressive barriers to vote. By releasing this data, we aim to regain our political power and mobilize a historic voter turnout across Indian Country.”

The IFS dispels the inaccurate narratives and misconceptions that the Native vote is inconsistent and unengaged. Key findings include:

“The Indigenous Futures Survey is the next step in reclaiming our collective voice and power,” said Judith LeBlanc, Director of Native Organizers Alliance. “The survey highlights that Native voters are an educated sector of the electorate. Although Natives were the last to get the right to vote, we vote in greater numbers than the general public. Native peoples are engaged in challenging narratives online and ready to protest on the streets. We are politically engaged and passionate, and these findings will show you just that.”

“The Indigenous Futures Survey aimed to amplify the voices of Native People, to center the injustices contemporary Native Peoples experience, and to galvanize change. These political and Covid-19 reports represent a first step in building a future in which we enjoy the same rights, protections, and opportunities that other Americans enjoy. To create this future, Native people must advocate for our own needs and priorities, and non-Native people must learn to see, hear and value our voices,” said lead researchers Dr. Stephanie Fryberg of the University of Michigan and Dr. Arianne Eason of the University of California, Berkeley.

Understanding the issues that are important to Native peoples is imperative in reaching the engaged Native electorate, especially in the seven key swing states with a large Native population: Michigan, Wisconsin, North Carolina, Arizona, Colorado, Minnesota and Nevada.

We would like to express our immense gratitude to the research team who worked tirelessly on this project:

Visit http://indigenousfutures.illuminatives.org/ for the full report.

About Center for Native American Youth at the Aspen Institute

The Center for Native American Youth (CNAY) at the Aspen Institute is a national education and advocacy organization that works alongside Native youth—ages 24 and under—on reservations, rural, villages and urban spaces across the country to improve their health, safety, and overall well-being. Native youth deserve to lead full and healthy lives, have equal access to economic opportunity, draw strength from Native culture, and inspire one another. CNAY achieves this through empowerment and by administering culturally competent programs that build leadership, create a youth-led policy agenda, and amplify the youth-led narrative. By supporting youth-led and community driven initiatives, CNAY continues to build a network of Native youth leaders across the country. Through hands-on training and technical assistance, the Generation Indigenous program, the CNAY Youth Advisory Board, Champions for Change, and other platforms, CNAY continues to grow its programming using Indigenous methodology. CNAY is a policy program at the Aspen Institute.

IllumiNative is a national, Native-led racial and social justice organization founded in 2018. Their mission is to amplify contemporary Native voices, stories and issues to build power for Native peoples to advance justice, equity, and self- determination. IllumiNative uses research, narrative and culture change strategies to disrupt and interrupt invisibility and toxic misconceptions, and to educate, engage and move hearts and minds within diverse sectors of American society about Native peoples and issues central to advancing justice and equity.

The Native Organizers Alliance is a training and organizing network dedicated to building the capacity of Native tribes, traditional societies, and community groups to make transformational change. It also provides a forum for Native leaders and organizers to work in collaboration with each other and promote their work with non-Native national allies. The Native Organizers Alliance (NOA) supports grassroots-driven social change rooted in Native traditional practices and values to advance sovereignty and the health and wellbeing of rural and urban Native communities and reservations across Indian Country.

About University of Michigan

Dr. Stephanie Fryberg (Tulalip Tribes) is the Diversity and Social Transformation Professor of Psychology at the University of Michigan. Dr. Fryberg led the team of scholars involved in the Indigineous Futures Survey. Dr. Fryberg’s scholarship includes research on the harmful effects of Native American mascots (Of warrior chiefs and Indian princesses: The psychological consequences of American Indian mascots on American Indians); why people hold onto false narratives about Indigenous Peoples (Sanitizing History: How National Identification and Negative Stereotypes Reify the Celebration of Columbus Day); and the harmful effects of the invisibility of Indigenous Peoples (Making the Invisible Visible: Acts of Omissions and Commissions). Furthermore, Dr. Fryberg has provided testimony to the U.S. Senate Committee on Indian Affairs regarding the impact of racist stereotypes on Indigenous people, was lead psychologist on an Amicus Brief for Harjo v. Pro-Football, and served as an expert witness in the Keepseagle v. U.S. Department of Agriculture class action lawsuit.

About University of California, Berkeley