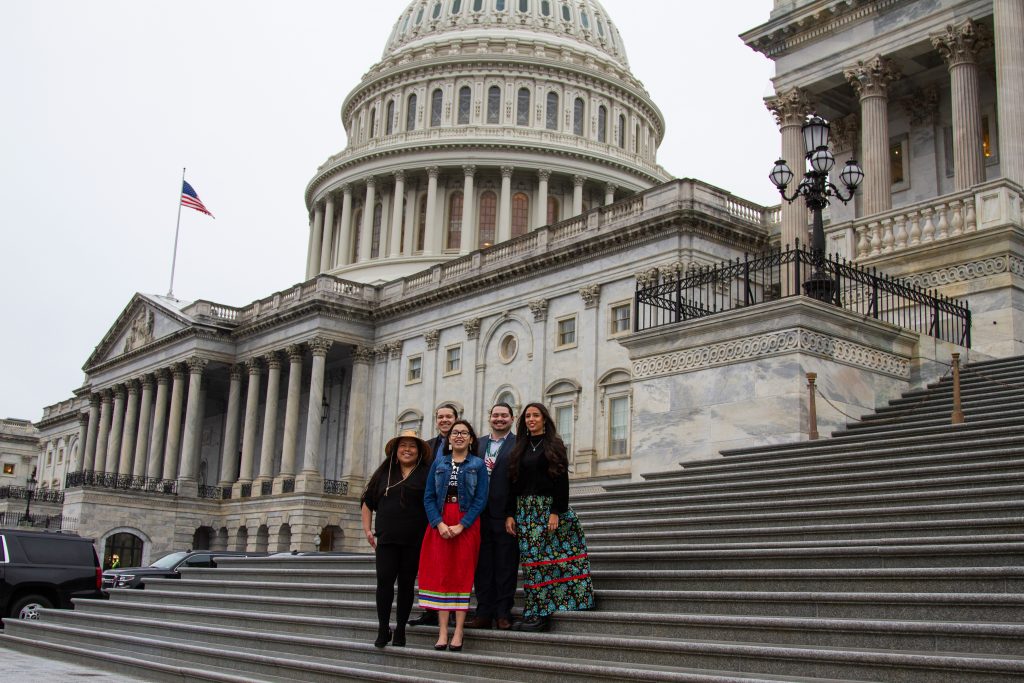 The Champions began their Hill Day Meetings by appearing with Former Senator Dorgan of North Dakota at the National Congress of American Indians (NCAI) event. Senator Dorgan then introduced the Champions and welcomed them on stage to share their work and platforms with the audience. After all introductions were finished the Champions were presented with a gift for their accomplishments within their communities.

Following the NCAI recognition, the Champions met with Naomi Miguel, Professional Staff  and Subcommittee for Indigenous Peoples of the United States, and former Champion for Change Sam Schimmel for an advocacy 101 training. Naomi shared her story with and experiences of her time working on the Hill. Sam expanded on Naomi’s experiences with and shared some his extensive history advocating on behalf of his people and Native youth. Their Champions were able to use their knowlegde to help prepare them for the meetings with their Representatives.

Congresswoman Haaland told the Champions “Be proud to bring your voices here. Congress has never heard a voice like ours.”

Once their meetings were finished, the Champions were encouraged to attend the NCAI reception later that evening, which took place at the Museum of the American Indian. The Champions socialized with tribal leaders, policy makers and Native scholars who were in attendance. Paulette Jordan (Coeur d’Alene Tribe) made an appearance where she advocated for the next generation of Native leaders. The museum was open during the time of the reception so the Champions that attended toured the different exhibits.

The Champions began their final day on the Hill by meeting with Kansas Congresswoman Sharice Davids (HoChunk Nation). Davids shared the importance of the Native vote. Owen Oliver (Chinook and Isleta Pueblo) engaged in dialogue with Davids. Owen asked what she was excited for in the future. Davids answered by stating the ‘power’ Indian Country has can turn the outcome in this upcoming election.

From there, the Champions continued with their meetings with their state representatives. Shavaughna Underwood (Quinault Nation), Isabella Madrigal (Cahuilla and Turtle Mountain Chippewa Nation), Warren Davis (Navajo Nation), met with Senator Lisa Murkowski of Alaska. The trio introduced themselves and their platforms and shared some of the work they are doing within their communities.

To end the afternoon, the champions met at The Aspen Institute for green screen interviews to share their experiences over the week. Once every Champion had to opportunity to share their story, they met for dinner to debrief the week and celebrate their accomplishments.

"My dreams may seem farfetched to some people, but in order to survive as Native people and retain our culture and heritage, we cannot sit back and keep them as dreams. I plan on going to school and coming back to make them a reality."